Finland as a Data Center Location
A Market Overview

Finland as a Data Center Location

Finland has become one of the most attractive investment targets for large and mid-sized data centers. There are many good reasons for this. Let us provide an overview of the Finnish market for data centers as it presents itself today.

Finland has a reliable nationwide power grid, availability of renewable energy and one of Europe’s lowest electricity prices. According to Invest in Finland, it is possible to save up to 50% of total electricity costs compared to other European locations. In addition, large-scale data centers have enjoyed lower energy tax rates since April 2014. Due to the alleviation the energy tax for data centers in Finland is 0,703 cents per kWh. However, only data centers exceeding 5 MW are entitled to the alleviation.

The operating costs are further reduced by the fact that Finland’s climate is cool year-round. For example, the annual average temperature even in the capital city Helsinki, situated in southern Finland, is merely 6.6 degrees of Celsius – in northern Finland the temperatures are even lower. As a land of thousands of lakes and with a coastline exceeding thousand kilometers, Finland offers also great possibilities for water-based cooling systems.

Finland offers a secure environment for data centers not only geologically but also in terms of political and legal stability. According to the most recent Data Center Risk Index 2016, Finland was ranked the world’s 4th safest country for data centers.

Last but not least, Finland has an abundancy of skilled, dedicated, and language-proficient IT professionals.

Finland has an ideal location in Europe with cable connections to Nothern and Central Europe. It has direct cable connections to Sweden, Estonia, Russia and Germany. In 2016, Finland was connected to directly to Germany through the so-called C-Lion1 submarine cable. The cable is 1 172 kilometers, consisting of eight optical fiber pairs with a total capacity of 144 Tbps.

Finland also functions as a key location between Europe and Asia, and the country continues to develop its infrastructure in order to reduce the latency by creating shorter links from Europe to Asia. A direct cable connection to Asia via the Northeast Passage is in planning.

According to research in 2012, Finland hosted around 2,800 data centers. However, there are less than ten data centers with the total capacity exceeding 5 MW. Hence large-scale data centers are relatively novel to Finland. However, in recent years Finland has been attracting increasing interest amongst data center investors, various big investments have already taken place, and more are on the pipeline. 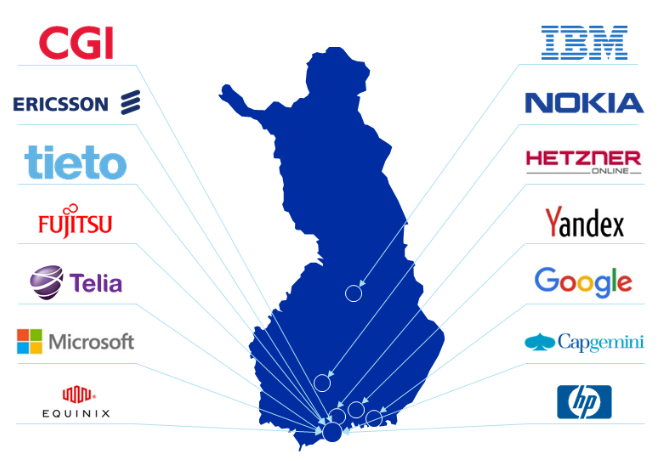 The largest data center projects in Finland include Google’s data center at Hamina, southern Finland. In 2009, Google bought a 60-year-old Finnish paper mill and turned it into a modern data center that is cooled down using cold sea water and powered by wind energy. The data center has an estimated total capacity of over 100 MW.

Also in 2018, Hetzner Online GmbH, a rapidly growing German data center operator, started operations of a new data center in Tuusula in southern Finland. The data center has an estimated total capacity of 20 MW. Hetzner states that it chose Finland as the location for the data center because of cheap electricity, cool weather and good cable connections to Germany due to the new C-Lion1 submarine data cable, which Hetzner also invested into.

Another large data center investment was made in 2013 by Russian internet company Yandex. The company, renowned for its popular search engine, built a 40 MW data center at Mäntsälä, southern Finland – a location chosen due to its good location and reliable energy output.

More data center investments are expected in Finland. Notably, a consortium of enterprises called Silent Partner announced in October 2018 that they are planning to build three data centers in Finland with the expected maximum capacity of 250 MW.

The Finnish government aims to develop Finland into a Global Data Hub – it was one of the main investors in the C-Lion1 submarine cable project and it is also strongly supporting building of a cable between Asia and Europe. Finland’s commitment to data center projects is also expressed in lower energy tax rates.

Municipalities in Finland are eager to get their share of the data center investments and are, thus, competing to attract investors in a variety of ways, for example by offering affordable sites.

All in all, in Finland the stakeholder interest is strong, making it a particularly attractive location for foreign investors.